What is single variable data and how can we represent it visually?

Create the following plots for our data set. Each must include a title, labels, and scales.

Assignment: Find your own data set of about 25 values and create plots

What does its shape tell us?

Skewed. The skewed distribution is asymmetrical because a natural limit prevents outcomes on one side. The distribution’s peak is off center toward the limit and a tail stretches away from it. For example, a distribution of analyses of a very pure product would be skewed, because the product cannot be more than 100 percent pure. Other examples of natural limits are holes that cannot be smaller than the diameter of the drill bit. These distributions are called right – or left–skewed according to the direction of the tail.

Plateau. The plateau might be called a “multimodal distribution.” Several processes with normal distributions are combined. Because there are many peaks close together, the top of the distribution resembles a plateau.

Edge peak. The edge peak distribution looks like the normal distribution except that it has a large peak at one tail. Usually this is caused by faulty construction of the histogram, with data lumped together into a group labeled “greater than…”

Comb. In a comb distribution, the bars are alternately tall and short. This distribution often results from rounded-off data and/or an incorrectly constructed histogram. For example, temperature data rounded off to the nearest 0.2 degree would show a comb shape if the bar width for the histogram were 0.1 degree.

Focus on center, spread, and outliers

Today will focus on measures of center (or central tendency)

Using the following data for salaries from a small company:

Does the mean or median better represent our data?

Sometimes it is helpful to divide the data into fourths. We find the center by finding the median, then find the “centers” of each half. 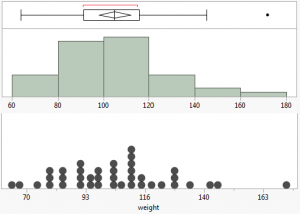 Assignment: Create a box and whisker plot for your Marshmallow Challenge data set

The interquartile range is a measure of the middle half of the data set. it starts at the lower quartile (Q1) lower and ends at the upper quartile (Q3). It is the range defined by the difference between Q3 and Q1.

Outliers are data points that are greater than 1.5IQR above Q3 or 1.5IQR below Q1. They are found by multiplying the interquartile range by 1.5 and either adding it to Q3 or subtracting it from Q1. Values outside of this range are outliers.

Find the IQR and outliers for the example data set:

Assignment: Find the IQR and Outliers for your Marshmallow Challenge data set

Your packet should have the following: